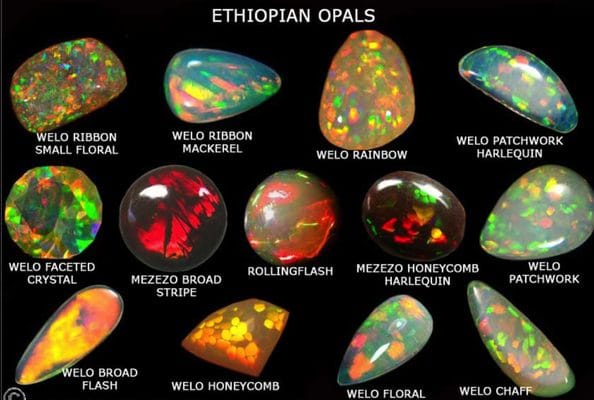 Below we see a Chart depicting the range of Ethiopian Opals in existence. The beauty and range of colour and limited availability is what makes the Ethiopian Welo Opal so sort after as a precious Gem.. Although it has been reported that the North African Opal was used to make tools as far back as 4000 BC, the first published report of an Opal gem deriving from Ethiopia did not appear until 1994. This discovery was recorded in the Menz Gishe District in the North Shewa Province of Ethiopia.

The opal, found mostly in the form of nodules, was of volcanic origin and was found predominantly within the weathered layers of Rhyolite. The Shewa Province Opal was mostly dark brown in colour and had a tendency to crack which caused a lot of ‘market turmoil’ and distrust in the Ethiopian Opal.

Its flawed ‘cracking’ tendencies made it very unpopular in the gem trade and the Ethiopian Opal received a very bad name. It got so bad that it led the Ethiopian Govt to regulate the market and now, only licensed Opal Agents, can trade in their Sale.

In 2008, a new Opal deposit was found near the town of Wegel Tena, in Ethiopia’s Wollo Province. The Wollo Province Opal was different from the previous Opal finds in that it more closely resembled the sedimentary Opals of Australia and Brazil, with a light background and often with a very vivid and mystifying play-of-colour. The Wollo Province Opal, more commonly referred to as “Welo” or “Wello” Opal, has become the dominant precious Ethiopian Opal in the worlds gem trade. Only local Farmers and Ethiopians are allowed to mine the Wello Opal which is found in a plateau between 2,500 and 3,300 Meters above sea level.

Like all mines, the Welo Opal in a finite commodity which means once it is mined there will be no more until another discovery is made. The prices of Welo Ethiopian Opals therefore remains strong and is a favourite when mounted on Silver or Gold fine jewellery pieces.