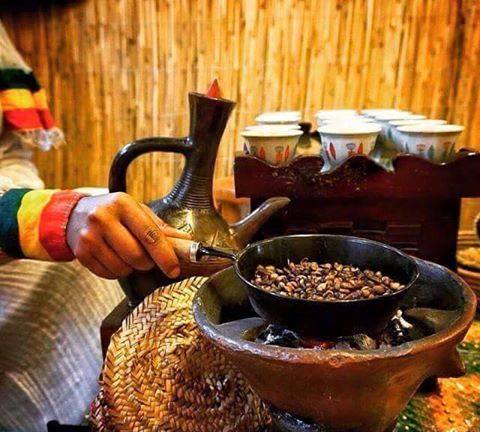 It doesn’t matter where you are or what you are doing…When the Habesha coffee ceremony starts, there is always time to make time. Some things are worth waiting for. The Basics:
The ceremony is typically performed by the woman of the household and is considered an honour. The coffee is brewed by first roasting the green coffee beans over an open flame in a pan. This is followed by the grinding of the beans, traditionally in a wooden Motar and pestle.

The coffee grounds are then put into a special vessel and boiled. The boiling pot (jebena) is usually made of pottery and has a spherical base, a neck and pouring spout, like in the picture above, and a handle where the neck connects with the base.

Watch the two videos below to understand the process and if ever invited for Habesha Coffee…be prepared for a social event with much talk and snacks…sometimes for hours. One cup is never enough…

Video One – Traditional Buna being made in Addis Ababa Merkato